I like to cook with ginger, and against all odds, the kids like eating stuff with ginger. The problem, as is always the case, is that I’ve got 45 minutes or less to prepare and serve dinner. When a recipe calls for ginger root it basically knocks the meal out of contention for an easy after work/school meal. I suppose I could go and buy one of those $5 tubes of pre-pureed ginger, but really, it goes about two meals and it’s so full of other preservatives to maintain color and whatever, I don’t actually feel like I’m doing the right thing. Plus, that would require planning, and I can tell you good intentions (aka: grabbing a ginger root off the shelf) are way easier than planning. At least for me. Anyhow, I’ve got a middle-ground that also manages to sort out the problem of garlic at the same time. It’s a piece of cake and you can totally knock it together after a day of mopping, sweeping, cursing and threats of death and destruction.

All you need is a decent sized ginger root, peeled and cut into 3/4″-1″ cubes – you’re aiming for about a dozen of these. Also a medium sized garlic clove, peeled. Toss the whole mess into a food processor until it’s as pasty as you want it. If you want to get pastier, add a bit of olive oil after you’ve minced it, stir that around with a spoon and go back after it with the food processor. 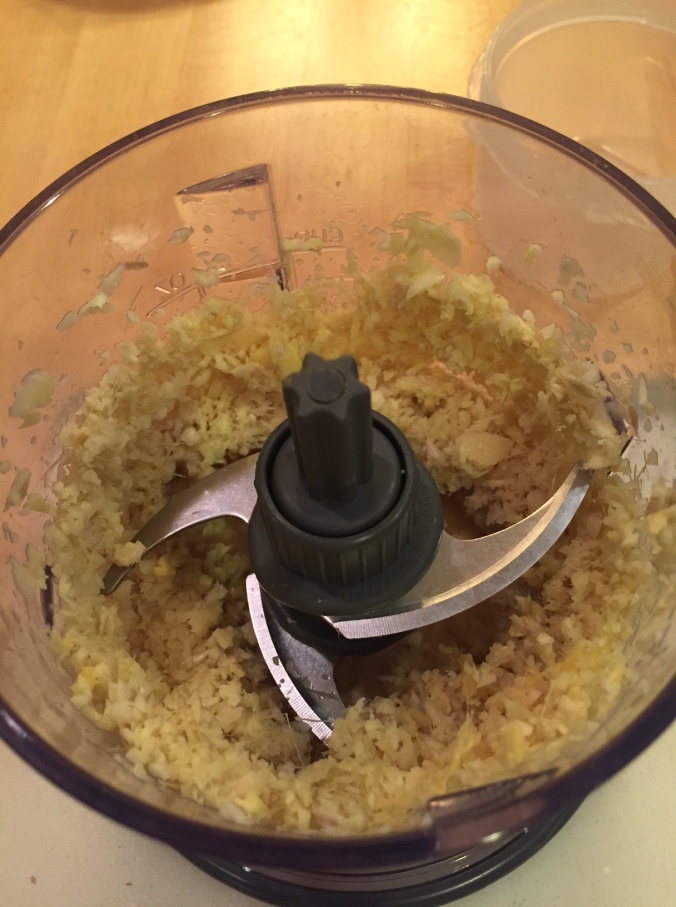 Then, use 1-2 Tbsp in whatever recipe is calling for ginger. I also use it extensively in stir-fry. It keeps for weeks in the fridge and while it does acquire a sort of greenish tinge, I assure you, it’s still perfectly fine. unless it’s been there for a year and also has a small colony of semi-sentient beings taking a foothold on the surface.