I’m pretty familiar with Black-Box wine. I might even say I’m something of a connoisseur. However, I’d never heard of Black-Box Whiskey before tonight. If it weren’t for a colleague giving me the heads-up, I’d still be ignorant. It’s been on the market in some places for nearly a year (based on a brief google search and cursory review of result descriptions.  In any case, within 20 minutes of catching wind of such a gloriously incongruous whiskey situation, I’d arranged for a box to be brought home. How could I not?

This is a generic american style whiskey. It’s a drier whiskey reminiscent of a bourbon, but without the strong sour-mash thing coming through, but it’s absolutely not like an Irish whiskey with their much sweeter qualities. It’s no-doubt a sour mash/corn situation, but it’s not a bourbon. Really, it’s more like a boutique or small-distiller american whiskey.

My first impression is that the nose is all spice, and the tiniest hint of caramel. It almost smelled like the bottle of 1971 Seagram’s Canadian whisky I came into ownership of last year. While I wasn’t sure what to expect with the first sip of black box, I’d rather expected it to have a lot in common with barrel-aged gasoline. This is one of those cases where I was pleasantly surprised. This stuff isn’t bad. Smooth enough to be taken neat, even. However, it’s a bit bland. Not that the spicy notes that call up thoughts of cinnamon aren’t strong, it’s just that overall, there’s not a lot going on. It’s not boring or tasteless though, just unremarkable. Fortunately, an ice cube improved the situation.

With a single ice cube rattling around my glass, the flavor really opened up. That apparent single-note of spice gave some ground to the vanilla and caramels that were somewhat hidden without. Mouth-feel also improved. It didn’t seem so thin on the lips, making it smoother and enhancing the caramel.

I paid just over $31 for this 1.75L box, which puts it at something like $13.30/750mL.  Alaska pricing and taxes aside, this is on-par with the cost of most bottom-shelf whisky, but it’s a much easier thing to drink.

My final word here is that black box is generally retaining expectations in crossing over from the boxed-wine realm. It’s good, drinkable, and solid value. While it’s somewhat unmemorable, I’d buy it again.

My rating comes in at a: ‘drink on the rocks’. 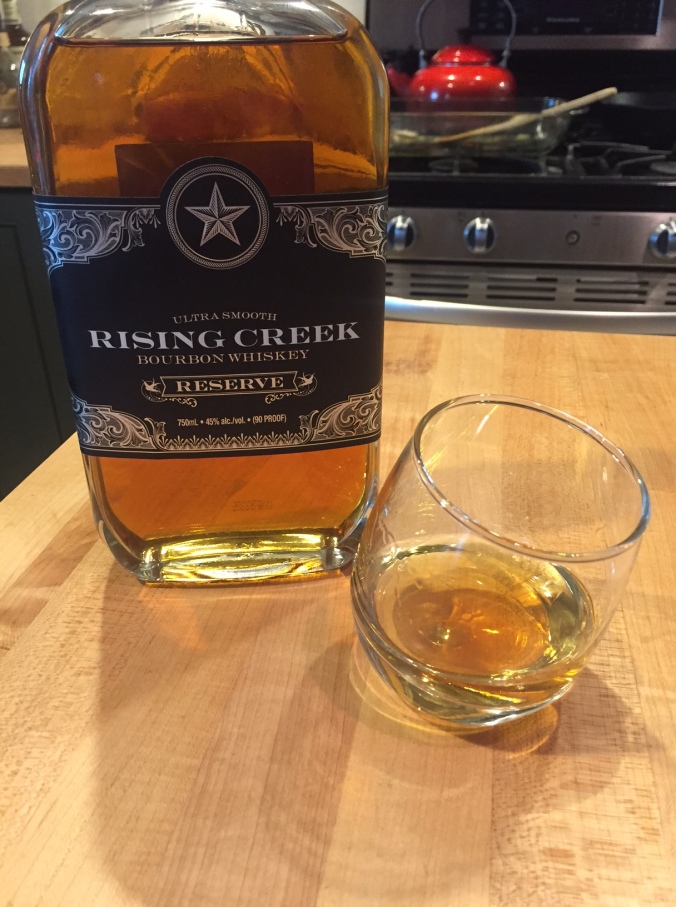 Lookey-loo! I finally got round to doing an actual bourbon review! And only a week late. So, just real quick, to make sure we’re all up to speed. What is Bourbon? To start, the mash (the fermentables in water) must be 51% corn. The rest of the grain is usually a mix of barley and rye. The other thing is that it’s got to be aged in new charred oak barrels – and quite frankly it’s not any sort of whisky unless it’s been aged on oak. Interestingly Bourbon does NOT have to be made in Kentucky, that’s just Kentucky straight bourbon, which has it’s own special marketing designations. Normally, when these are fermented (and this is generally true for the bulk of large modern distilling operations) a sour-mash is used to ferment the mash. In Beer, you’d mash by steeping the grains in water at a temperature of about 150F. Provided you have enough barley (natural source of amylase), the starches in your mash will convert to sugars that can be fermented. In a sour-mash, everything is just dumped into a fermentation vessel of some sort and allowed to slowly convert the starches to sugars and ferment at the same time. Lactic acid builds up in the process giving a distinct sour taste that comes through so strongly in american whiskeys & bourbons.

In any case, that’s enough about bourbon as a thing. On to reviewing this specific whisky. First off, it is smooth like a Canadian whisky, but without all of the heavy caramel flavors you usually get in one of those. Normally, Bourbons tend to be a bit more rough around the edges.

The nose here reminds me of apple, but it also smells ‘raw’, as if it’s just been brought out of the still and into the cup. It’s sort of hard to describe, but it’s like the grain flavor has been reduced into it’s essential grainy bits and fed to you. The flavor is kinda bland actually. A hint of caramel, a hint of oak, or toffee, a bit of something nutty and some spice, but that’s sort of it. The finish is not super long and a wee bit spicy. Really, it’s about as smooth as the taste itself. If I’m being honest, this bourbon reminded me of what would happen if an Irish Whiskey knocked up it’s Canadian Whiskey girlfriend.

On a scale of Mix to Neat. I’d actually put this as shots. (yes, below mix, it mixed plain and din’t add much to the drink). Anyhow, it was cheap, and I wouldn’t say don’t buy it, but meh, sometimes you need to take shots – like when arguing with someone politically diametrically opposed to you on Twitter. Nobody is going to win and you really just need something to bring you off the ledge of apoplectic rage.