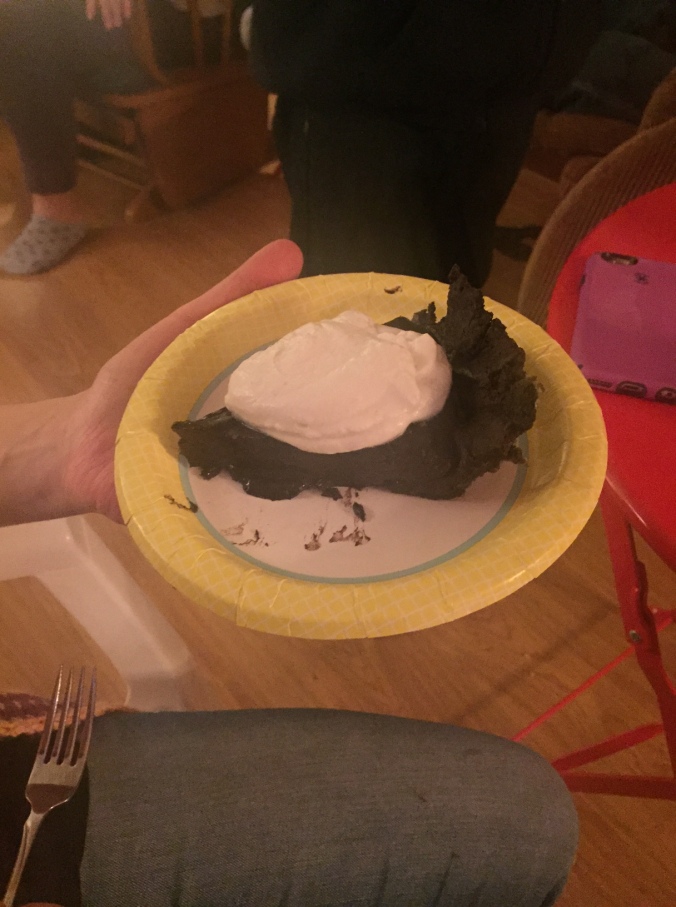 Before I start, I want to make it clear that I’m fully aware that you can get all kinds of awesome desserts without a hint of dairy. But let’s all be honest with each other. The very best dessert selections basically consist of the following ingredients with sugar and vanilla: Cream, butter, and Eggs.

This summer my wife developed a pretty bad chicken egg allergy to accompany an already irritating milk allergy. Which, no problem, we’ve got ducks – take that chickens! Unfortunately, ducks stop laying when it gets to be winter, and so at the one time of year when we really need them, nothing. Those feathery bastards just waddle around the yard and eat. So, all the expense without the benefit.  Anyhow, this leaves us without eggs at a critical time of year, so I’ve got a trifecta a of problem – no butter, no cream, no eggs. That knocks out entire kingdoms of desserts. Basically, this leaves me with Oreo cookies because they don’t actually appear to have any nutritional content whatsoever, therefore they’re pretty near to hypo-allergenic.

So, instead of just handing my wife a carton of Oreos, which would have been fine, but not particularly festive (even if I got the peppermint ones), I made them slightly more sexy and called it pie. The interesting thing about this recipe is that it’s frikkin’ good. The texture is good, the flavor is good, and if someone didn’t tell you it was vegan, which they would because nobody is going to serve you a vegan dish without making damn sure you know it was vegan, you might not even know it was vegan. That said, I did pull the guts of this from another cook, so here’s the credit for that: http://hellyeahitsvegan.com/vegan-chocolate-pudding/

Start by putting your beaters and bowl into the freezer. I just stick mine outside, much colder and doesn’t take up freezer space. 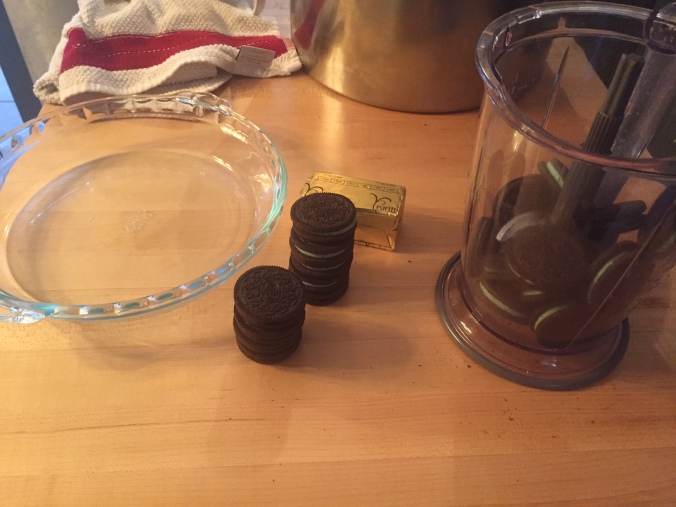 Empty most of a package of Oreo cookies into a food processor, about 30 cookies. The reason you use the double-stuff is that the filling helps the butter-replacement as a binding agent. I did try the skinny ones, and I didn’t like it as well. Melt the butter and pour over the cookies then grind into a pulp. This is a bit of a pain and you might find that just putting the lot into a gallon ziplock bag and pounding the ever-loving crap out of it with a rolling pin also works just fine. 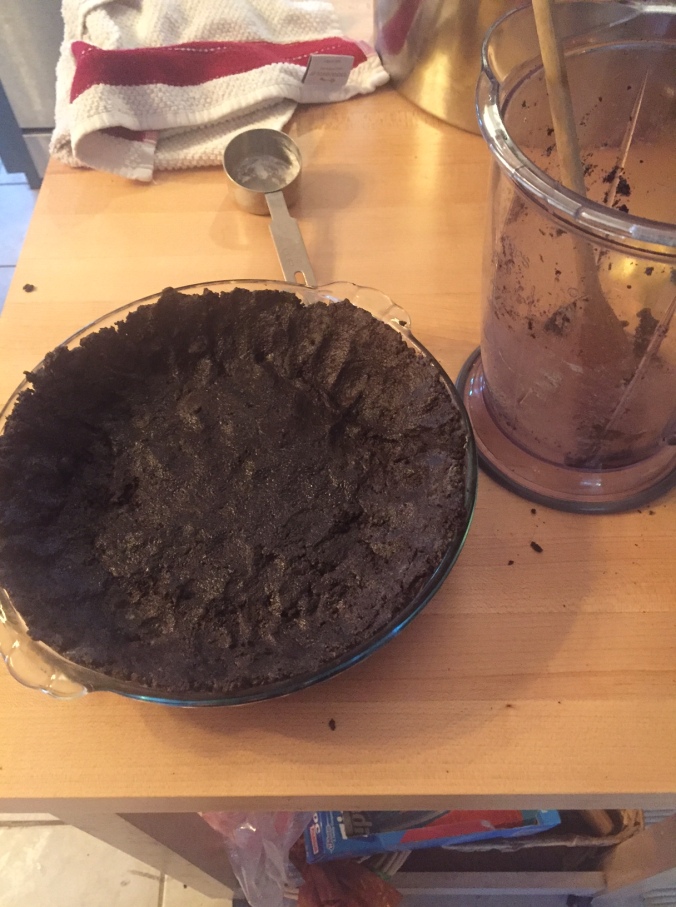 Press the cookie stuff into a pie-crust shape inside a 9″ pie-pan, then set it into the fridge to set.

Make the whip cream by opening two slits into the bottom of the coconut milk can and then opening the top. Scoop out the heavy solids into your cold bowl, and leave behind any extra fluid. Beat this until it’s smooth, add 1 tsp of vanilla and 1/2 C powdered sugar and beat until it’s whip cream (stiff peaks). If it starts to get watery again, you may have over-beat it – either way just stick the whole mess back into the fridge to set, it’ll be fine. 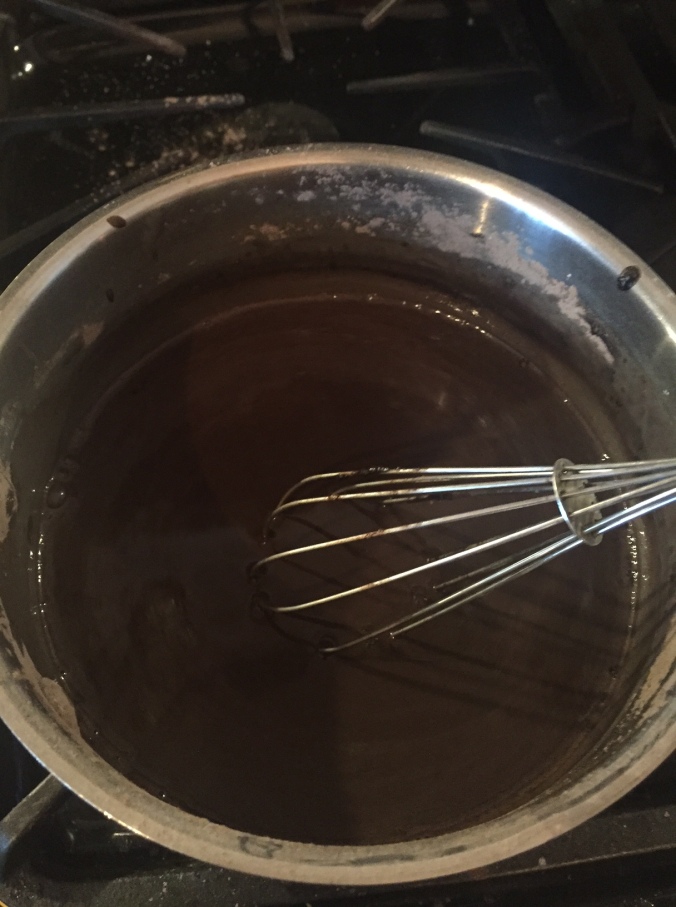 The final bit is to make the chocolate pudding filling. This happens fast, so be vigilant. Whisk together the corn starch, cocoa powder and 1/2 C. Sugar, put this into a small sauce pan and slowly add the cashew milk over a medium low heat with a whisk, once it’s all together and seems to have mixed, switch to a rubber spatula, stirring constantly, make sure the mix is coming out of the corners of the pot. It’ll start to thicken first around the edges and it’ll be lumpy. Keep stirring. It’ll thicken about the time you ask yourself how much damn longer do I have to stir. Since we’re putting it into pie, thicken just a bit more than you might for any other pudding. Remove from the heat and pour into the Oreo cookie crust. Paste it back in the fridge to set. That’s it. You’re done and you’ve only dirtied 95% of the specialty cooking items you own. Anyhow, that’s it, just top with the whip-cream when you serve it.