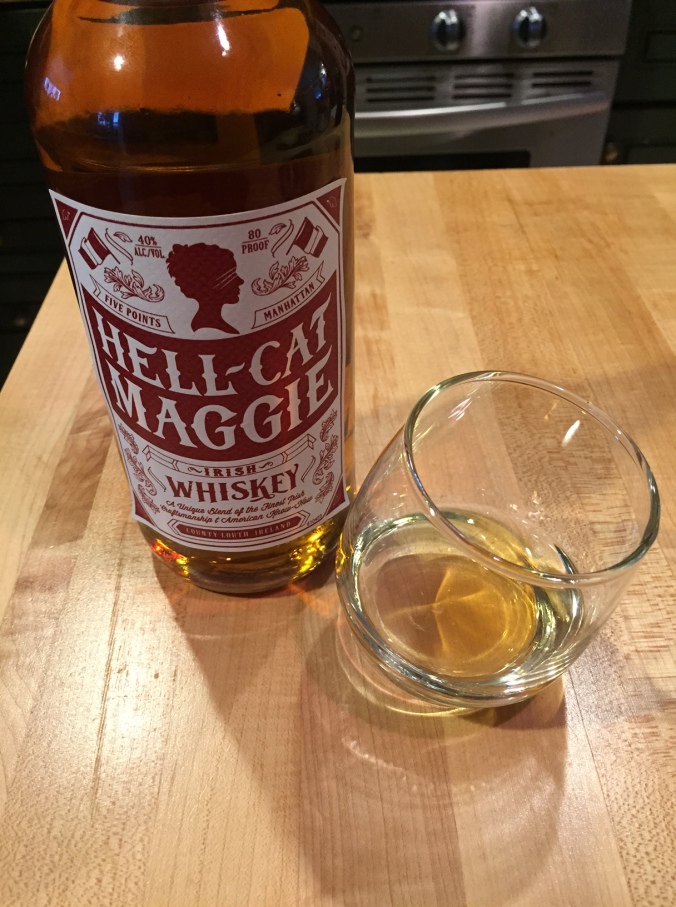 Look! Another whisky review blog – I’ve decided to try and do these about twice a month so that I don’t blow a hundred bucks a month on whisky. Since I don’t make any money at this, I can’t exactly write it off as an expense. In any case, I’m riding at 100% review rate of Irish Whiskys and I feel a bit weird about that given that the blog purports to involve bourbon. That said, this one was on sale and I’d never seen it before, so I thought I’d give it a go.

To start, this isn’t a fancy enough bottle to come in a cardboard tube that waxes poetic on the flavor profile. Rather, this one comes with the borderline alarming story:

“Hell-Cat Maggie was a well-known criminal in Manhattan’s five points district and a member of the notorious Dead Rabbits gang. She was a fierce street fighter and actually filed her teeth and nails into points to better shred her opponent’s skin.”

Interestingly, not only is this write-up largely accurate, it gives me all I need to know about this whisky at first glance: I will not likely be treated to a smooth, complex, yet delicate drink. It’s more likely to kick the crap out of me.

Since there isn’t any description of what I SHOULD taste, I’ll just give you my impressions. And as my palate isn’t developed much beyond “this is good” to “this is really not that great”, you can take all of this with a grain of salt.

The nose contains pear, cloves and hints of caramel. The first taste that struck me, however, was the oak. It was surprisingly strong, not woody, but certainly the dominant part of the flavor profile, bringing with it notes of caramel, spice and grain. If you put it on the rocks, the pear flavors come out much stronger. The finish is extremely long and spicy, largely owing to the high level of oily conigers that originate from the last part of the distillation process (the tails). It’s also got a healthy burn. Not quite as bad as most bourbons, but generally more than a typical Irish whisky. This one is also not particularly sweet, which is one of my usual complaints about mid-shelf Irish whiskys.

On a scale of mixer to neat, I put this one at rocks or add just the tiniest bit of water to open up the flavor profile. For the cost, probably not a go-to, but this is a good one. I’d consider buying again.