Okay – I know, yet another alcohol-related review. I want to be sorry, but I’m not because but at least I’m providing new content. Also, another plug for my novel: Wine Bottles and Broomsticks. It’s a good summer read and summer is very nearly over!

Before saying anything else, I need to apologize for the picture. I didn’t have the appropriate glass, all of my proper pint glasses were in the dishwasher, and I totally over-poured and had to clean it all up before I could snap the picture. The beer I chose today comes from my wife. She loves the sorts of heavy beers that could have a fist-fight with a stiff bowl of oatmeal and win with one hand tied behind it’s back. She cracked this one open and couldn’t finish it because it’s too bloody hot here for this kind of beer just now.

What we have here is the St-Ambroise Oatmeal stout from Mcaulslan Brewing in Montreal, Quebec. The can advertises 45IBUs and 5%ABV with cascade, Willamette, and Kent Goldings hops. As a home-brewer, these are my favorite go-to hop choices with the exception that I typically add Chinook for aroma. Naturally, this beer had me excited, even though it wasn’t for me.

Before getting into my review, I want to come clean. When I was first learning how to enjoy beer, I got my hands on some French-Canadian beers, and I absolutely hated them, they were heavy and sweet and had unusual flavors. Now I’ve gotten older, lazier, fatter, and generally more exposed to lots of beers, I really like the occasional Quebec beer. I find them to be a lot like Belgians in the sense that they’re bigger than life and having more than one every now and then is just too much.

I’m going to take this one from the angle of a home-brewer. This beer is like sucking on a mouthful of chocolate malt and roasted barley. It’s also surprisingly bitter, not IPA bitter, but not sickly sweet like an imperial stout. The roasted barley adds an interesting bitter note. The nose on this thing is all sweetness and malt –coffee, chocolate, and molasses. You don’t even get a hint of hops until you drink it. The flavor is the same with mild and well-balanced hops. As the name suggests, it’s a heavy beer with a huge foamy head. This beer reminds me of a Guiness, but about 3x as heavy with a lot more punch in the flavor department. Unlike a lot of dark beers, this one is less sweet. Normally, after drinking a beer like this, I’m pretty much over it –I just get overwhelmed by the sweetness. This one, however, I’m finding that getting to the bottom of the glass doesn’t make me feel as though I’ve just had six candy bars.

On the whole, this is an excellent beer. It’s not really the sort of thing you’re going to want to stock in your fridge, and it’s absolutely not a great summer drink, but this is one you should have in your fridge come winter holidays.

I figured since I’ve got a bit of momentum on this blog now, I’d start by plugging my new (not food or beer-related) book – Wine Bottles and Broomsticks. Now that’s out of the way, I’ve got a second beer review – HEY! Don’t judge me. I’m trying to keep to my diet. I think two beer reviews a couple weeks apart isn’t awful. It’s just that stress, you know? In any case. This review is brought to you by a 4th of July party and a beer hidden behind some truly horrible spiked seltzers that will not be getting a review because if you can’t say anything nice, don’t say anything at all. I actually caught sight of this brew last week, lurking behind the unmentionables in the beer fridge, but I was looking for something to write about, and I thought – what the hell, let’s give this a go.

What we’ve got here is the HUSKY IPA Mosaic India Pale Ale from Alaskan Brewing. I’m not 100% sure why they had to include IPA in there twice – once spelled out and once in abbreviated form, but it probably has more to do with graphic design and not with a lack of proof-readers. The can advertises a “Tropical, Hoppy, and Fruity” beer at 7.0ABV.

The nose is pineapple and grapefruit, which is a nice start to a summer IPA, in my opinion. The first few sips made me feel like this was a pretty heavy beer, actually, however, once I got into about the first 1/3rd, my opinion changed. It’s a lighter crisper beer than I was expecting from Alaskan. It’s not a brew that threatens to overwhelm with sweetness or from being too heavy. You could easily knock two of these back and not even regret it. Thinking about this from the summer perspective, I’d place this beer on the ‘refreshing’ end of the spectrum, but only just.

The flavors that come through the strongest are the fruity pineapple and hints of spice from the ‘pine-needle’ quality you get from the Mosaic hops. As far as IPAs go, this is not particularly bitter, I’d describe it as a mild IPA, but not disappointing, you still get a satisfying hoppy kick. My one criticism is that the heavy reliance on the mosaic hops and under-stated aroma hops gives this beer a pretty one-note feel. It’s a little disappointing because I think with a bit more diversity in hops –especially with the aroma, it would be a better beer.

In all, I’d call this a pretty good brew. For comparison, it’s a milder version of Deschutes Fresh-squeezed IPA – which is one of my go-to beers. This is a great one to bring to parties or if someone else has brought it in a 12-pack mixer –drink all of these first before someone else gets there. 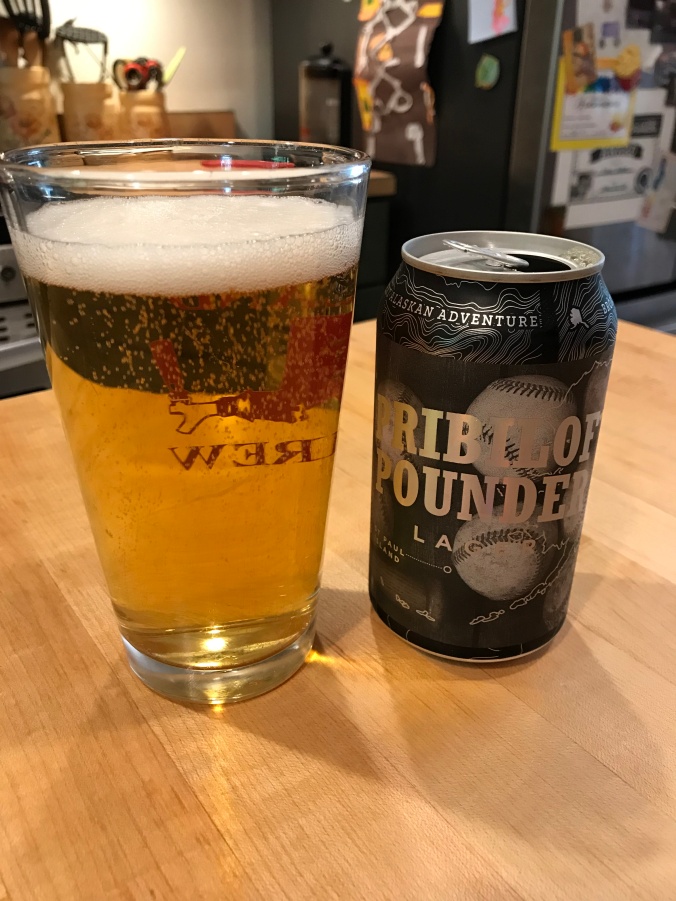 I know I promised to do a lot more with this blog earlier this year, but I haven’t managed to get there. Not only have I been busy working the day job, but I’ve also been consumed with book publishing. In June, I released Wine Bottles and Broomsticks, my first novel, and I’m preparing for publication of my second book The Dark Queen of Darkness later this year – That’s a long way of saying I’ve been busy, distracted and I think it’s time for a beer*.

So, here is my firstest EVER beer review. The cool thing is that I think this is a beer I probably shouldn’t have – in any case, when it came into my hands it hadn’t been released yet. What I can tell you is that it was gifted to me and I thought what better way to deal with this beer than to give a review!

What we have here is the Pribilof Pounder by Broken Tooth Brewing (local Alaskan Brewery well known for its association with the Moose’s Tooth Pizzeria and the Bear’s Tooth theater pub in Anchorage, AK.) The beer has a fun little story on the back explaining how it was named for Alaska’s first baseball team on St. Paul Island (details: aleut.com/baseball). It’s a lager clocking in at 4.3% ABV and 13IBUs. When poured, it’s pretty much what you’d expect – the color of straw and fizzy like a soda with a somewhat thin, but persistent head.

Setting the can & details aside, this is, as advertised, absolutely a hot-day baseball beer. I can picture myself at a local midnight sun ball-game sipping. It’s got mild flavor with hints of fruit (you could put a lemon or lime in this, and it would work well – think a heavier version of Carona). I think my favorite part of this beer is the clean, sharp finish. What surprised me was that this was a maltier brew with more body than I was expecting. It vaguely reminds me of a hefeweizen, but without the characteristic banana or clove flavors.

For drinkability – this is going to be a pretty versatile brew. Most of the time, you drink it and beer, and it’s great, other times you want to stick a lime or something in the neck to give it a bit more kick. Sometimes, like at Tex-Mex restaurants, they’ll serve you a margarita with a Carona upended in it. This is the sort of beer that would go well in all three circumstances.

In all, I’d call this a pretty solid specimen of the style. I’m not a huge fan of lagers as it is, and won’t spend a lot of my time investing in this one, but I would recommend this to anyone looking for a craft brew who isn’t a fan of really malty or bitter drinks.

Have you tried it? What do you think?